I recently rediscovered the following vignette that I wrote several years ago and decided to share it here for the first time. It depicts a fictional intersquad scrimmage game during the Pittsburgh Pirates’ spring training camp at Whittington Park in Hot Springs, Arkansas in 1913. I took cues from a contemporary photo of Hall of Famers Honus Wagner and Max Carey at Whittington Park and tried to capture what might have been happening in that moment. Although largely based on newspapers accounts that described what spring training at Whittington Park was like, some bits are embellished. For example, it’s true that Cockburn’s Ostrich Farm, located just across the street from Whittington Park, did use the ballpark to train the ostriches to pull sulky carts. However, I very much doubt that they were ever inside the park during a game. I hope this snapshot of spring training action gives you some small sense of what the heyday of baseball at Whittington Park may have been like. Enjoy! 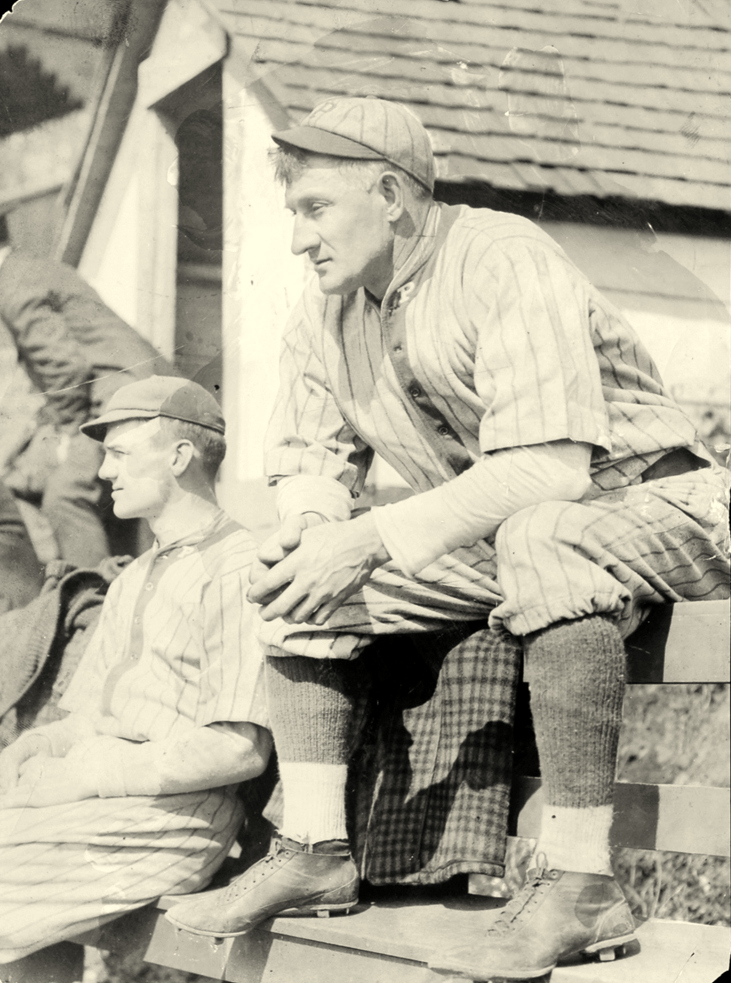 Perched atop the backrest of a wooden bench behind third base, Honus Wagner took a long deep breath of the chill Ouachita mountain air. The famous old ballplayer sat quietly with his enormous hands folded, exhibiting a gentle, contemplative posture. Although 39 and entering the twilight of his career, Wagner’s awkwardly powerful frame was still easily discernible among the other players at the Pittsburgh Pirates’ 1913 training camp in Hot Springs, Arkansas. Seated next to him, talented young teammate Max Carey glanced around the Whittington Park baseball diamond, taking in the scrimmage game that was unfolding between the Yannigans and the Regulars with one out in the third inning. Spring sunshine filled the ballpark, forcing Carey to squint to see the action. On the mound for the Yannigans, rookie pitcher Al Mamaux checked the runner on first base between pitches to left-handed hitter Chief Wilson. From the baseline, Pittsburgh manager Fred Clarke grunted instructions. Wagner watched Mamaux intently.

“Say, Hans, where did you go last night?” asked Carey.

“To bed,” replied Wagner, whose tired appearance left some doubt.

Carey paused a moment and then replied, “I thought so, but I heard otherwise –something about a midnight jaunt to angle in Swan Lake.”

Wilson swung on the pitch and shot a foul ball back toward the bench. Carey gave a jerk reflex to his right. Wagner, with hands still folded, watched the ball rocket over his head without flinching. Hitting a tree branch, the ball came to rest on the hillside above well before the crack of the bat ceased echoing in the mountain valley that cradled the little ballpark.

“I would sure well like to know the next one of those isn’t coming for me,” said Carey.

A nearby boy jumped up from his stool and climbed up the hillside to retrieve the ball. Returning it to playing field, the practice action continued. At first base, the runner began inching away from the bag, attracting a long, indiscreet glare from behind the slumped left shoulder of Mamaux. Meanwhile, the sound of casual chatter among the players filled Whittington Park. Augmenting this came a low booming noise from the foul side of the right field chalk where a large, disgruntled ostrich was voicing its displeasure with being harnessed to a sulky cart.

“I wish they’d get that filthy animal out of here. It was bad enough when we had to share this place with the Brooklyns last year,” said Carey. “But really, how are we expected to practice when they have that big ugly beast running around here? At least they keep the gators fenced in the farm.”

“He’s leaning too much. Watch him, Max,” said Wagner, undistracted.

Mamaux stepped off the rubber and made a move toward first base. An errant throw sent the ball well out the reach of the first basemen and squarely into the chest of Manager Clarke. The impact, though harmless, liberated a few curses from the old baseball man, each of which lingered in the air among the dust cloud left behind by the runner’s hasty flight to the second base.

“A pitcher can’t make a good pickoff when he’s slumping that much. Always watch for that,” advised Wagner.

“That’s what you keep telling me,” said Carey. “You know, I think I’ve almost got it down pat. Last year I swiped forty-five. This year I’m going to steal more than Cobb.”

At home plate, Wilson leaned on his heavy wooden bat while waiting patiently for the dust to settle. When Manager Clarke finished coaching Mamaux with his choice words of wisdom, Wilson stepped back into the batter’s box and dug his cleats into gravely soil. The ensuing pitch from the rookie pitcher came in high and hard, an expression of his inexperience and frustration with himself. Wilson, in turn, made solid contact and pulled the ball hard to right field. Ascending up and over the unamused ostrich, the ball easily dropped over the short outfield fence and bounced onto Whittington Avenue where an oncoming trolley car narrowly avoided the projectile. The sparse group of grandstand patrons watching the scrimmage game offered Wilson a few complementary claps. The lone umpire who had been calling strikes from the infield gestured for a new ball and headed back to his customary position behind the next batsman.

Finishing his circuit around the bases, Wilson picked up his bat and sauntered toward the little white springhouse next to Carey where a spigot offered some of the spring water for which the valley was famous.

“Say, Chief, that’s your third home run since we’ve been here, is it not?” asked Carey.

The tall, lanky slugger took a long swig from a cup full of cool mineral water.

“If you say so, Scoops,” came his reply in a low, Texas drawl. Picking up his bat again, Wilson walked off without saying another word. The booming noise from right field filled the silence.

“You know, Hans, I like coming here in the spring and all, but I’m mighty grateful that we don’t have to play in this ballpark all season,” said Carey. “I suppose I could get used to the short fences and such, but there’s something downright strange about letting an ostrich play right field.” 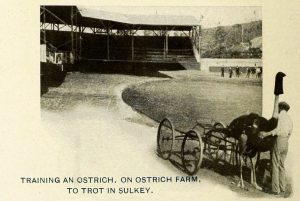 Another crack of the bat resonated across the grounds. The new ball, already scuffed and muddied, fell gently into an unmanned part of left-center and rolled toward the trolley car barn that abutted the field. A sudden carom forced the center fielder to quickly change his trajectory and simultaneously inspired the baserunner to try for three bases instead of two. Taking extra care to avoid tripping in the ditch that diverted a little creek around the outer parts of the park, the center fielder relayed the rogue orb in to the infield. When the third basemen’s long sweeping tag came down, the sliding runner was easily tagged out.

“Another thing –the infield here’s like sandpaper. The other day I slid into second and the rocks tore a hole in my trousers. Goodness knows why they put a diamond on such a rough spot of ground.”

A breeze carried some of the slider’s dust toward the bench. A well-dressed photographer from the Tri-State News Bureau in Pittsburgh approached and requested permission to take Wagner’s portrait. The tired old veteran unenthusiastically consented, never taking his eyes off the pitcher. The photographer adjusted the camera’s lenses and cocked the shutter. With a click, Wagner’s iconic likeness became fixed on the camera’s film.

Carey continued, “Still, I suppose there’s plenty to be said for Hot Springs. A man can certainly enjoy himself here –drinking the water, climbing the mountains, taking the baths and all. The hotels aren’t half bad, and most of the clubs are friendly. So I’ve heard, anyway.”

Mamaux, who had quickly worked the new batter to an 0-2 count, readied his next delivery.

“And the weather darn sure beats Pittsburgh –not bad for moonlight fishing, I would guess,” said a winking Carey.

The batman watched a third strike sail across the plate with little interest. An indiscernible groan came from the umpire to signal the end of the inning, much to the relief of Mamaux and the other young hopefuls. The Yannigans began clearing from the playing field, and Carey stood to stretch. Before taking his regular outfield position in front of the trolley car barn, he turned to Wagner once more.

“Yes, Hans, I say that there is nowhere quite little this little valley. But I suppose it is all the same to you after all these years. What do you say?”

Wagner pulled his cap low and breathed in the mountain air slowly. “I say your parents were right—you should have been a preacher, Max.”